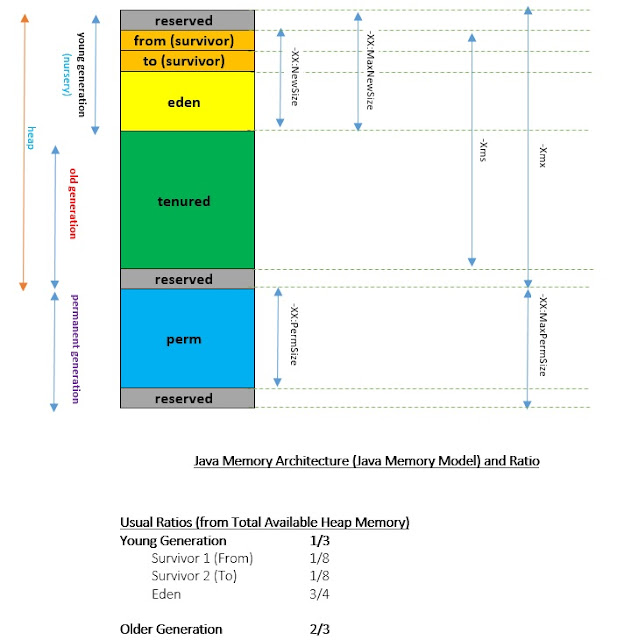 The above is the Java Memory Model for the Heap as well as the PermGen for any Java Application running in the Java Virtual Machine (JVM). The ratios are also provided to get a fair understanding of how the distribution of allowed memory is done across each of the generation types. All of the above is completely applicable up to Java release 1.7 (inclusive). The above is also known as the 'Managed Area' of the Memory Model.

In addition to the above, there is a Stack Area, which can be configured use the -Xss option. This area holds the references on the heap, native references, pc registers, code cache and local variables for all threads. This is also known as the 'Native Area' of the Memory Model.

Managed Area of the Java Memory Model (Java Memory Architecture)
[Young Generation/Nursery] Eden Space
All new objects are first created in the Eden Space. As soon as it reaches an arbitrary threshold decided by the JVM, a minor garbage collection (Minor GC) kicks in. It first removes all the non-referenced objects and moves referenced objects from the 'eden' and 'from' into the 'to' survivor space. Once the GC is over, the 'from' and 'to' roles (names) are swapped.

[Young Generation/Nursery] Suvrivor 2 (To)
This is also a part of the survivor space (You may think of this also a role in the survivor space). It is here, where during the GC, all the referenced objects are moved to, from 'from' and 'eden' .
[Old Generation] Tenured
Depending on the threshold limits, which can be checked by using -XX:+PrintTenuringDistribution, which shows the objects (space in bytes) by age - Objects are moved from the 'to' Survivor space to the Tenured space. 'Age' is the number of times that it has moved within the survivor space. There are other important flags like, -XX:InitialTenuringThreshold, -XX:MaxTenuringThreshold and -XX:TargetSurvivorRatio which lead to an optimum utilization of the tenured as well as the survivor spaces. By setting -XX:InitialTenuringThreshold and -XX:MaxTenuringThreshold we allow an initial value and an maximum value for 'Age' while maintaining the percentage utilization in the 'Survivor (To)' as specified by the -XX:+NeverTenure and -XX:+AlwaysTenure, as they suggest are used to either never tenure an object (risky to use) and the opposite usage is to always tenure, which is to always use the 'old generation'. The garbage collection that happens here is the major garbage collection (Major GC). This is usually triggered when the heap is full or the old generation is full. This is usually a 'Stop-the-World' event or thread that takes over to perform the garbage collection. There is another type of GC named as the full garbage collection (Full GC) which involves other memory areas such as the permgen space. Other important and interesting flags related to the overall heap are -XX:SurvivorRatio and -XX:NewRatio which specify the eden space to the survivor space ratio and old generation to the new generation ratio.

[Permanent Generation] Permgen space
The 'Permgen' is used to store the following information: Constant Pool (Memory Pool), Field & Method Data and Code. Each of them related to the same specifics as their name suggests.
Garbage Collection Algorithms
Serial GC (-XX:UseSerialGC): GC on Young Generation and Old Generation
Use the simple mark-sweep-compact cycle for young and tenured generations. This is good for client systems and systems with low memory footprint and smaller cpu.

Concurrent Mark and Sweep GC (-XX:ConcMarkSweepGC): GC on Old Generaton
As the name suggest, the CMS GC minimzes the pauses that are required for GC. It is most useful to create highly responsive applications and it does GC only in the Old Generation. It creates multiple threads for GC that work concurrently with applications threads, which can be specified using the -XX:ParallelCMSThreads=n.

G1 GC (-XX:UseG1GC): GC on Young and Old Generation (By Dividing Heap into Equal Size Regions)
This is  a parallel, concurrent and incrementally compacting low-pause garbage collector. It was introduced with Java 7 with the ultimate vision to replace CMS GC. It divides the heap into multiple equal sized regions and then performs GC, usually starting with the region that has less live data - Hence, "Garbage First".

In Computer Science, a memory leak is a type of resource leak that occurs when a computer program incorrectly manages memory allocations in such a way that memory which is no longer needed is not released. In Object-Oriented Programming, a memory leak may happen when an object is stored in memory but cannot be accessed by the running code.

A Memory Leak occurs when Object References that are no Longer needed are Unnecessarily Maintained.

Memory Leak in Java is a situation where some objects are not used by Application any more, but GC fails to Recognize them as Unused.

A Memory Leak appears when an object is no longer used in the program but is still referenced somewhere at a location that is not reachable. Thus, the garbage collector cannot delete it. The memory space used for this object will not be released and the total memory used for the program will grow. This will degrade performances over time and the JVM may run out of memory.

In a way, Memory Leak would occur when No Memory can be Allocated in the Tenured Space.
Some of the Most Common Causes of Memory Leaks are:
I recommend the usage of Visual VM bundled with the JDK to start Debugging your Memory Leak Issues.
Common Debugging of Memory Leaks
The common strategies or steps for going about debugging memory leak issues include:
Wishing Happy Times, Fixing Java Memory Issues!
at October 31, 2015 No comments:

Do you agree with me?
If not, your comments along with your own personal list (if any) would be really appreciated.
at October 29, 2015 No comments: 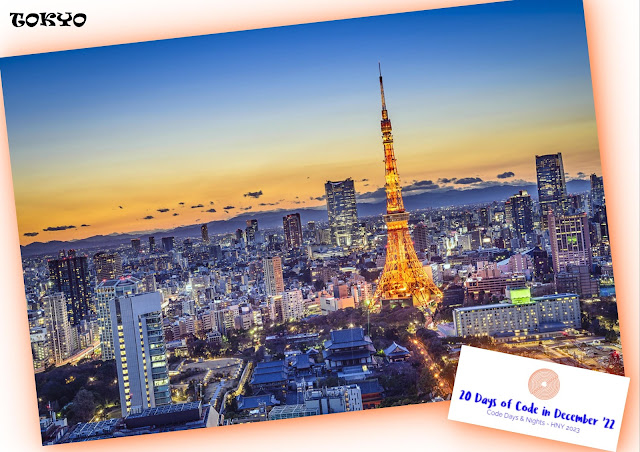